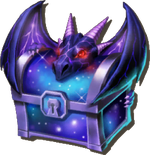 The fifth type of Chest found in the game. Magic chests can be found in the following dungeons: Hellish Abyss, Pyramid, Floating Island, Dragon's Nest, and Chaos Gate.

They can also be bought from the Trade House

Magic chests may contain N? special resources. The resources that can be obtained from Magic Chests are the same resources from quests that drop the chests themselves. These are:

The following items have been found in Magic Chests. In terms of quantity, expect N? items per chest when their quality is

Community content is available under CC-BY-SA unless otherwise noted.